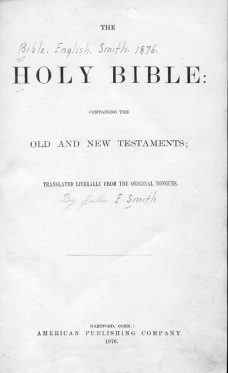 With “Color-Coded Bibles” and “Leggo My Jesus” posts, I thought I’d finished writing about the proliferation of bible versions. After the American Patriots’ Bible and the Leggo (Brick) Bible, what more interesting could be said? So far the Adam-was-white bible version has not been published. They may still be writing verses to boost their claim. (Now that Steve Bannon is advising the Trump team, it may appear sooner than we’d like.)

But lo! In the New Books section of Meekins Library, this appeared: The Murderous History of Bible Translations !  The revealing subtitle given by author Harry Freedman is “Power, Conflict, and the Quest for Meaning.”

Of course I went straight to the index to look up Leggos, but found only “Logos”: not the same thing.

I did find a fascinating chapter on Julia Smith, born 1792, the first woman to translate the bible from original texts (no, not that kind of texts). She did the translations, not for publication or public use, but because she was interested. She somehow got hold of a Hebrew Old Testament, a feat in itself at the time. I won’t attempt to summarize the life of Julia and her sisters; just know that they are foremothers of all independent, thoughtful women. Julia made her last public appearance addressing the Connecticut State Suffrage Association at age ninety-one.

I highly suggest this book, if only for the chapter on Julia Smith. Here is one quote: “….one newspaper, which had not even seen her translation, declared it simply proved that some women will deign to do things for which they are not suited.”

A good motto for all of us.

One thought on “More Bible Stuff”